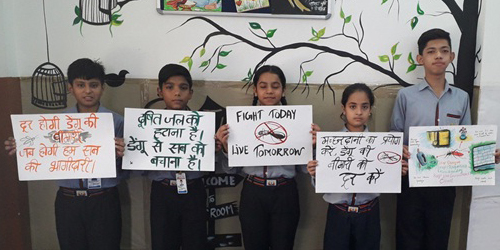 With the aim of combating the deadly diseases such as Dengue, Chikungunuya and Malaria, Sant Nirankari Public School, Tilak Nagar organized a special DENGUE AWARENESS CAMPAIGN on September 23, 2019 (Monday).

Mr. Jitender, Nodal Officer of the school conducted a special assembly to acquaint the students and teachers about the symptoms as well as the preventive and remedial measures of Dengue, thereby encouraging the students to spread awareness about the disease among the masses too. They were made aware about the Do’s and Dont’s to avoid mosquito breeding and bite.

An Inter – house Poster Making competition was conducted on the theme of vector borne diseases.

The parents of the students were also involved in the campaign.

Awareness about Single Use Plastic